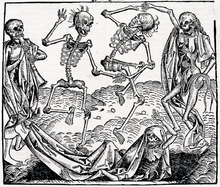 It's estimated that the Bubonic Plague (Black Death) killed 20 to 50 million people in Europe between 1347 and 1351. It's attack was swift and merciless. People didn't know how to deal with this threat. They didn't understand nor appreciate personal hygene nor sewage removol. They were vomitting in the streets - and dieing horibily. Almost half of the European population was eliminated in four years.

It took almost five years for the uneducated masses of the middle ages to learn how to deal with this threat.

In 1990 another plague assualted us - PowerPoint. Twenty one years later the people are still suffering from Death by PowerPoint.

Because the pain is kept to oneself, because the death is in deals lost, and the vomitting is done in private.

Cleary - it's not painful enough - yet.

What are the numbers?

We don't know for sure.

Consider this. When was the last time you sat through a PowerPoint presentation? Today? Last week? Last month?

How did you feel during that experience?

Of the Fortune Five hundred Corporatioins in North America, let's assume that each of them endures at least 10 interal PowerPoint presentations each working day.

At the same time let's assume that their sales reps are delivering at least 50 external presentations each day.

The next 2,000 large sized corporations are delivering at least five presentations per day.

The next 5,000 large and medium sized corporates are delivering at least one persentation per day.

Of the hundreds of thousands of entrepreneurs at least 10,000 are delivering a PowerPoint presention each day.

Of the at least thousands of colleges and univeristies at least 2,000 must be delivering PowerPoint presentations every day.

So what does that leave us?


That suggests at least 57,000 presentations a day.

That means at least - 14 million presentations a year

Let's be conservative again and cut that number in half. So for for the last 20 years, at least 140 Million PowerPowerPoint presentations have been forcing people to vomit in private.

With at least five people attending each presentation - that makes at least 700 million people that have suffered the plague of Death by PowerPoint. That is more than twice the population of the USA.