Steve Jobs: How to Live Before You Die

Steve Jobs has been cited as an effective presenter - especially when he announced the new Apple products.

This presentation seems to show a shy, wounded and reluctant presenter.

The words are powerful. It was a well written speech. It is an amazing speech to read. The best way to enjoy this speech is to read it or listen to it - but not to watch it. You will notice that Steve Jobs read this speech - almost entirely.

That seems strange because he only told three personal stories. He knew those stories, yet he felt compelled to read his speech. When the audience reacted to his words, he did pause, but failed to look at them. He was clearly lost in his own emotion and discomfort.

Notice the lack of emotion on his face and in his body language. Although his message was important to his audience he was clearly telling it for his own personal cleansing.

Notice how he strokes his chin at personal moments. That is likely a sign of self comforting because of pain.

The man was likely in a swamp of personal pain during this presentation.

Your Audience Doesn’t Care About Your Problems 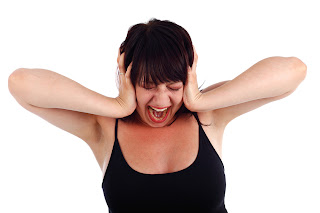 Yet, too many speakers start their presentation with their personal tale of woe.

The speaker started his presentation by telling us that he travelled from the west coast across three time zones and arrived around midnight. He went to the wrong hotel because he didn’t clarify that information before he travelled.

Was he looking for sympathy because of his stupidity? Was he hoping to gain rapport because he travelled? Meanwhile I was remembering that I had recently travelled half way around the world across nine time zones to speak. I didn’t bore my audiences with my personal pain and lack of sleep because they didn’t care.

Why did this speaker think that his audience cared about his travel challenges?

Stop feeling sorry for yourself. Stop crying to your audience. Deliver your message.

How Many Words Can You Have on Your Slides? 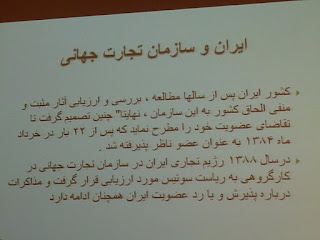 This is a question that more presenters need to ask before they speak. How many words should you put on your PowerPoint slides? What is the maximum number of words?

I wish more people would ask me because I would tell them - zero, zip, nada. PowerPoint slides should be for images only because it is a visual medium. Text is not visual. Images - photos, diagrams and charts are visual.

But, those people don't seem to listen to me.


Here is a tip that business presenters might find more palatable.

"Put as many words but no more on the slide than you can speak in one breath."

That practical advice comes from my friend, colleague and professional speaker, Mark Ellwood. He is a productivity expert who helps business professionals make better use of their most limited resource - time.

The photo above is a picture of a slide from a presentation I attended at a conference in Iran. As you can see - it has way too many words on the slide and no visuals at all. This PowerPoint scourge encompasses the globe.

The bad news is that presenters all around the world have been seduced into delivering boring PowerPoint presentations.

The good news is that presenters all around the world have been seduced into delivering boring PowerPoint presentations.

The wonderful news for you is that you can stand out from the competition by using less words and more visuals on your PowerPoint slides.

Look at your slide and try to read it out loud in one breath. I dare you! Then remove the excess words.