Move from Left to Right

English and other languages originating from read left to right. That means that these people naturally move their eyes from left to right when reading.


They prefer to absorb information in the same manner.


When you speak before an audience you can use that principle to enhance the acceptance of your message.


How can you use this principle in your presentation?

If you asked these people to draw a timeline of a project they will likely draw it from left to right. The left represents the beginning while the right represents the end or the future.

You can use the same methods to place problems in the past and solutions in the future. When you acknowledge an obstacle or an audience member raises an objection place them in the past - your right.


Place the strengths, benefits and desired outcomes of your idea or product in the future - your left.

You are reversing your movements for the benefit of your audience. This is not natural so you will need to rehearse these movements. The benefit to you is that they will be more willing to accept your ideas when they can SEE the progress.


Remember to also look in the direction in which you are gesturing to complete the picture. If you do this well the eyes of the audience will move in the direction you intended. That leverages the internal programming of the brain associated with left to right eye movement.


Of course when you present in the you will need to reverse everything above because they read from right to left.

And now a few words from our sponsors 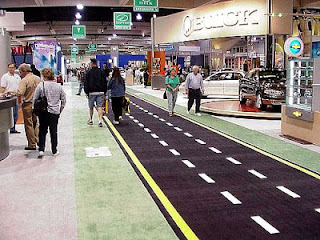 How to get more visitors to your tradeshow booth

Each conference sponsor had a booth in the tradeshow room and they were invited to the main stage to say a few words. This was an important opportunity that many of the sponsors failed to recognize.

Several sponsors took their turn at the microphone and bored us. They were clearly unprepared. Then one sponsor caught my attention with his first words. I listened to every word he said. As I looked around, it seemed that he had caught the attention of the entire audience.

What did this sponsor do differently that made him stand out?

First read what he said and did and then study my analysis of why it worked so well. I’ve segmented his presentation into four parts and added my headings to illustrate the flow of his presentation.

Opening
He grabbed our attention with his first words, “Have you tried to talk with your kids lately?” Then a short pause. “Some days you might not know whether to reach them via SMS, Facebook or Twitter.”

Benefits
Then he explained what his company did to help organizations better manage communication with their customers especially with the demands of social media.

Introduction
Then he stated his company name and invited people to visit his booth to discuss the issues and their options.

Close
Then he stated his first name and again invited people to see him at his (company name) booth.

Now let’s look into the mechanics of what he did.

Opening
Most speakers make the mistake of stating their name first. That’s a bad way to start for three reasons:

1 The audience usually doesn’t hear the name because they aren’t fully listening yet.

2 If the name is unusual or not enunciated clearly the audiences doesn’t understand it and thus they don’t remember it. Plus they might be annoyed.

3 The speaker’s name isn’t of interest to the audience so the first words don’t grab the attention of the audience and that’s a bad way to start a presentation. Starting with your name also suggests that you are going to talk about you instead of the audience or their interests.

Notice how this sponsor grabbed immediate attention and interest with his first words. Why? Because he was talking about the audience and something personal that they related to. He didn’t start by talking about himself.

Benefits
After he knew he had the attention of the audience he explained what his company did and how it could help the listener. He made it relevant.

Introduction
At this point the audience might be interested to know his companies name. Remember that the purpose of this self introduction is to draw visitors to your tradeshow booth. They don’t need the person’s name. They need to know the company name on the booth. And you need to invite them to visit for a reason. State a clear call to action.

Close
Now you can state your first name because the audience is ready to hear it.. Don’t make it difficult for people by giving too much information too early in the conversation. The real conversation will begin when they stop by your booth. At this time simply state your first name to appear approachable. They don’t need to hear or know your last name. Restate the call to action and end by reinforcing your company name.

To finish nicely, end with a smile and a friendly wave.

Notice the four important stages of your short presentation. If you think that’s too much work just consider how much money you or your company invested as a sponsor.