Open your presentation with a startling fact...

Notice the precise choice of words in his opening. They grab attention and set the context of his presentation. Nicely done.

CEO Stumbles through a Sloppy Close to his Keynote Speech 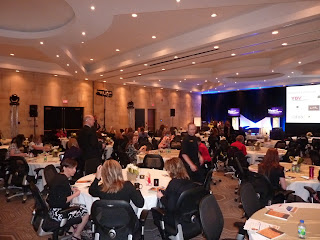 The CEO of the advertising agency delivered the opening keynote speech at the marketing conference. He seemed like an appropriate choice. His career in the industry was impressive and the company he founded was enjoying industry buzz.


His presentation offered entertaining case reviews from the world of advertising. A few of those campaigns were produced by his company. Like many marketing speakers, he also included at least one Apple story. That felt like Deja vu. Still, his insights were noteworthy.


The close to his speech was disappointing. He ended with these four lines.


Thank you for your invitation to speak.


Am I supposed to take questions?

What a pathetic close!


That’s a bland and uninspiring statement. That felt like the lackluster statements you hear from insincere retail clerks admonishing you to “Have a nice day.”


“Thank you for your invitation to speak”


More bland and meaningless words. Clearly he didn’t take time to think of something more helpful to say to the audience.


The person to thank for the invitation is the person who invited him. The place for that would have been a private conversation with that person. The audience didn’t invite him. They simply attended to hear his message.


This was thrown out as an afterthought. Clearly he didn’t plan to take questions.  He looked confused at this point.


“Am I supposed to take questions?”


Now he definitely sounded confused. After he asked for questions he hesitated and posed this question to no one in particular. Clearly he didn’t talk with the conference organizers to confirm their expectation or the parameters of his presentation.  This question portrayed him as a fumbling presenter – not the leader they hoped he might portray.


The man had impressive credentials in the advertising industry and as CEO of his own firm. But, the audience might be thinking “How can a man with a successful career be so careless as a presenter? Was he simply lucky?”


This CEO didn’t know how to end his presentation. That was curious because as the head of an advertising firm he stressed the importance of telling stories. He emphasized the need to sculpt three components to your stories; opening, body and close. But he didn’t do that with his presentation. Both his opening and close were disasters. I wonder if he delivers a better close when pitching to prospects.

What can you learn from this keynote speaker?

If you are the invited speaker


If you are the conference organizer


·       Don’t be celebrity-struck by the CEO – clarify your expectations
·       Don’t assume that every successful CEO makes an ideal keynote speaker
·       If you haven’t heard the person speak, you don’t know what you’re getting
·       Just because the CEO is speaking for free doesn’t make it a good deal


The close is important to the success of your presentation.  It’s the last words that the audience hears and when done well can leave them with a lasting impression. The close might summarize your key points, reinforce the message, offer them hope or encourage them to take the next steps.


People forget much of what you say but they tend to remember first or last impressions.

Disastrous Opening to the Conference 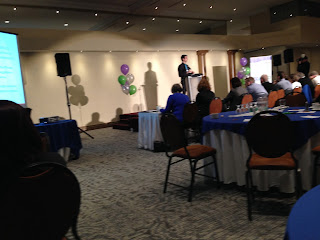 It started 20 minutes late
A full day conference will likely get behind schedule at some point during the day. It starts with a three minute delay, then a presentation that’s five minutes too long, a break extends an extra 12 minutes,  unexpected announcements steal seven minutes, a sponsor drones on forever… Surprise, surprise – by late afternoon your conference is running 20 to 40 minutes behind schedule.

Imagine starting the day 20 minutes behind schedule. When the program finally started at 9:20am there was neither explanation nor an apology. That didn’t feel like a good start to the day. The audience could only wonder when the day might end.

“How are you guys?”
That was the opening statement from the conference chair at 9:20 am. That’s a ridiculous question at any time because no one can answer that question. No one can speak on behalf of the group. That question is usually posed to satisfy the speaker. The speaker will assume that everyone is happy simply because there is no answer and no one feels qualified to answer on behalf of the group.

I was tempted to shout out “I’m annoyed that you’re starting late without an apology and explanation. I’m also insulted that you posed such a ridiculous question. When you ask, ‘How are you?’ Do you really want the truth?” But I restricted that to my inside voice.

Naturally, there was no reply to his stupid question. He probably didn’t care or even realize that we might feel annoyed with the delayed opening.

The second annoying thing about his question was the phrase “You guys” because that’s trailer trash talk. The major portion of the audience was university students who expected to enter employment in the business world. If they hope to earn respect they will need to clean up their use of colloquial language. When speaking to a group the correct term is “you”.

The smaller portion of the audience was representatives from business.  To the students these people might become advisors, mentors, recruiters and future employers. They might already be judging the students based on first impressions.

20 Members of the Team Introduced Themselves
The conference chair then called upon each of his conference team to introduce themselves to the group. Perhaps he thought that portrayed him as a team player. Instead, it was an agonizing waste of time. I appreciate that they were volunteers and deserved recognition but this wasn’t the time or best way to recognize them. I believe this choice demonstrated poor leadership and decision making skills.

“Welcome Everyone”
After the lengthy round of self-introductions this was the next phrase from the conference chair.

If he wanted to welcome us then his first words should have been “Welcome”. That would have been more effective than “How are you guys?”

“We Worked Really Hard”
Instead of stating the benefits of attending the conference he delivered this lame claim of effort. That phrase is either an excuse or a plea for appreciation. Who cares how hard you worked? That’s not important.  What can you deliver? How will we benefit? What’s in it for us?

Hello
Finally, the opening keynote speaker was introduced. His opening slide was the word “Hello”. What a thoughtless opening slide! Perhaps this speaker had never delivered a keynote speech. Why was he the keynote speaker? Apparently he was the CEO of a successful advertising agency. During his presentation he chronicled his rise in the advertising industry through several agencies before launching his own company. He offered important insights about connecting with your market and delivering your message. He didn’t demonstrate that in his presentation.

“So, what I’m gonna try to do…”
After the Hello slide, this was his opening line. How terrible! The opening line of your presentation, especially a keynote speech must engage the audience and create anticipation to hear your message.

Would that line grab your attention? Would you immediately sit up in your seat and be poised to listen to the rest of the story?

There are several mistakes with that line.
It’s trash talk – starting with the word “so” and using the slang “gonna”.
It’s vague and a waste of seven words.

“Try” sounds apologetic and uncertain. Do you remember Yoda’s thoughts on the word Try?

The speaker’s opening line was about himself and his efforts – not about the audience. You’d think that an advertising expert would know the importance of talking about your audience.

What do you do when you’re bored in a meeting? Perhaps you check the time or your messages. I glanced at my watch noticed that we were 58 minutes into the program. My consoling thought was “Good thing I wasn’t planning to stay all day”.

Improve the Power of Your Voice and Imagine the Results

What does Tony Robbins say about the power of his voice and his voice coach.

Who is this amazing voice coach?

Imagine if you could learn from this voice coach for a fraction of what private coaching normally costs?

If you move quickly you can get started on improving your voice at less than $30. The program is easily worth 10 times that amount. The price will rise. Why pay more than you need? Learn more here.

PS: Links are fixed now. If you tired earlier and were disappointed, you can  get theourhg now. :)